A woman’s reproductive system is centered on the uterus (including the cervix), which is also known as the womb. The ovaries attach to the top of the uterus, and the vagina connects the uterus to the outside of the body. The external genitals are called the vulva. Gynecologic cancers result from the rapid growth and spread of abnormal cells in one of these organs.

Compared to other types of cancer (like breast or colon cancer), gynecologic cancers are uncommon.That said, all women are at risk for developing gynecologic cancers, and the risk increases with age. It’s important to know the warning signs, as treatments are most effective when the cancer is found at an early stage.

TYPES of Gynecologic Cancers, and Who’s at risk

There are five major types:

Symptoms vary depending on the organ that’s involved and should always be evaluated by your doctor.

Vulvar cancer causes itching and soreness, along with a visible lesion. An area of skin on the vulva may have a different color than the surrounding skin.

So far, only cervical cancer has routine screening tests (the Pap smear and HPV testing). Because symptoms of early-stage gynecologic cancers are often vague and can also be caused by other, less serious conditions, doctors encourage women to have regular gynecologic exams to check for signs of disease.

Various diagnostic tests are used to diagnose gynecologic cancers. These may include:

If a gynecologic cancer is diagnosed, other imaging tests such as a positron emission tomography (PET) scan may be used to determine if the cancer has spread to other parts of the body.

Treatment depends on many factors, including whether the cancer has spread, and whether the patient is young enough to have children.

For more advanced disease, surgery is usually the best option. Hysterectomy (removal of the uterus) is common among patients with cervical, uterine and ovarian cancers. Doctors may also suggest radiation therapy or chemotherapy to prevent the cancer from spreading further. 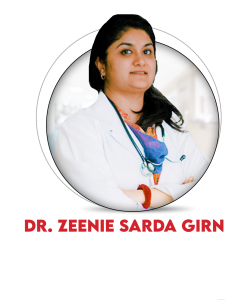 Dr. Zeenie Sarda Girn has extensive experience in Obstetrics and Gynaeocology over last 23 years in India and England. She has managed several normal and high risk pregnancies. She has vast surgical experience in performing hysterectomies, fibroids surgeries, surgery for gynae cancers both laparoscopic and open.  Also she is a specialist in managing urinary incontinence in women and prolapse of Uterus.

Request A Call Back